BookSavvy author Diane Mulcahy will soon be on  the PBS show White House Chronicle! The show’s host, Llewellyn King, recently sat down with Diane in her home to discuss her new book, The Gig Economy.

We’re thrilled for Diane’s appearance on PBS. What could be more exciting than a house call by a distinguished TV host and his camera / lighting / makeup crew? We’re also still laughing at this behind-the-scenes photo she snapped of her living room, transformed into a studio, for the interview. Congratulations, Diane! 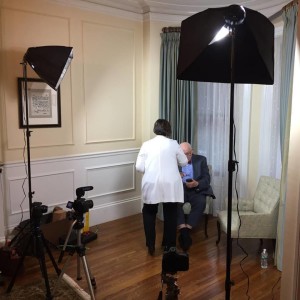 Spread the love
Got Galleys? What They Are and Why You Need Them »
« Newsflash: Our Authors Top Holiday Book Lists