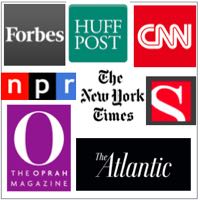 Our authors are having a BIG summer. They’ve been interviewed on local ABC stations, have been named finalists in the International Book Awards and have been guest posting like crazy on prestigious outlets. We’re so happy to help our authors get this coverage and just as pleased to share it with you!