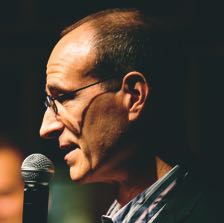 Arne Weingart is the 2015 laureate of the New American Press Poetry Prize, awarded for his debut poetry collection, Levitation for Agnostics (New American Press, January 2016). A Pushcart Prize nominee, Arne also won the 2013 Sow’s Ear Poetry Review Poetry Contest and has had poems featured by such esteemed publications as RHINO, The Georgetown Review, Oberon, Arts & Letters and The Spoon River Poetry Review.  He has been granted a writing residency at the Atlantic Center for the Arts and is alumnus of Columbia University’s MFA program in writing. Arne and his family live in Chicago, where he is the principal of a graphic design firm specializing in identity and wayfinding.