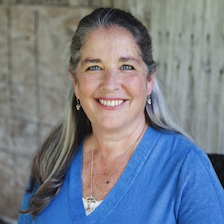 Libby Hoffman, author of The Answers Are There: Building Peace From the Inside Out, is the founder and president of Catalyst for Peace (CFP), a private foundation helping empower local communities impacted by violence to lead their own path to peace and development. For 15 years her initiatives have focused on Sierra Leone, where, alongside local leaders and citizens, she helped the West African nation’s communities heal and repair following 11 years of brutal civil war.  Several of CFP’s programs were instrumental in facilitating Sierra Leone’s post-Ebola response; all have become a major presence in Sierra Leone and a model for better approaches to international peacebuilding and aid work around the world.

Hoffman produced the award-winning documentary film Fambul Tok and co-authored a companion book by the same title. A former academic, she was the first female political science professor at Principia College and holds degrees from the Fletcher School of Law and Diplomacy and Williams College. The mother of three grown children, she divides her time between southern Maine and Washington, DC.