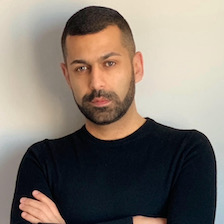 Luai Qubain, author of The Kindom’s Sandcastle, was born and raised in Jordan, where he was forced to lead a double life as a young gay man amidst a Middle Eastern society that views homosexuality as a disease and a sin. Having broken free from this oppressive environment, he moved to the U.S. where he writes about his experiences to help bring awareness to this pervasive yet often-overlooked aspect of injustice against the LGBTQ community. After fleeing Jordan, Luai received a degree in petroleum engineering from the University of Oklahoma, worked with an international oil and gas company in Denver and founded his own energy consulting firm. He lives in Denver with his husband, their three shelter-rescued cats and their Old English Sheepdog.