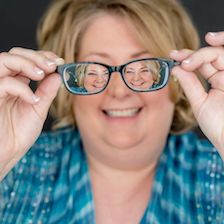 Stephanie Duesing is devoted to raising awareness of Cerebral/Cortical-Visual Impairment (CVI) and advocating for patients with this prevalent but largely unacknowledged cause of visual impairment. A former improv actor, model and singer who studied with Maria Lagios, Stephanie went on to become a music educator—first at the elementary school level and later as a Musikgarten teacher.  Through Musikgarten, she has helped parents learn about the neurological benefits of early music. Her memoir, Eyeless Mind: A Memoir About Seeing and Being Seen, tells the story of her son Sebastian’s unique diagnosis as a verbal visual processor with CVI and her family’s struggle to understand and seek medical help for this condition. A graduate of University of Illinois at Urbana-Champaign, she lives in the western suburbs of Chicago.