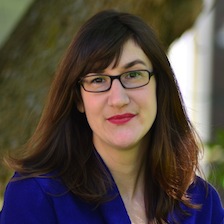 Since her first encounter with a policeman at the age of four, Stephanie Gayle, author of Idyll Threats (Seventh Street Books, 2015), has been fascinated by criminal justice issues.  Though she didn’t successfully convince that first cop that her name was Nicholas, she decided she’d become a defense attorney. Her experience working as a paralegal many years later cured her of that ambition.  So she turned instead to writing stories about crime.

Stephanie’s first novel, My Summer of Southern Discomfort, released in 2008 (William Morrow).  By day, Stephanie is a financial assistant at MIT’s Media Lab.  She has also worked at the New York Society Library, as an editorial assistant to Marilyn vos Savant, and at the John Simon Guggenheim Memorial Foundation.  When she read David Simon’s Homicide: A Year on the Killing Streets, of which a central message is that Baltimore citizens don’t volunteer information to cops, she thought, “Huh.  I knew that at age four.”