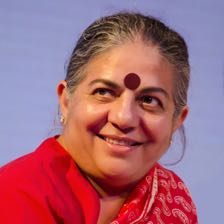 An icon worldwide for the ecological revolution and a leader of the alter-globalization movement, Vandana Shiva has made teaching by example the basis of her work. Walking the back roads of India alone in the late 1980s in search of traditional seeds threatened by industrial agriculture, she returned leading a procession of 500,000 demonstrators – farmers and activists – and with a network of 120 seed banks in place. Her initiatives have borne fruit on five continents and her legal proceedings against multinational corporations have earned her numerous awards, including the Right Livelihood Award – known as the “alternative Nobel prize”. Wrapped in her timeless sari of artisanal cotton, she calls upon each of us to become that “little nobody” who can reverse current trends.

A doctor of quantum physics and philosophy, she lives up to her name: the god Shiva is also known for his fierce character and as a protector of life. Her history is marked by commitment, body and soul, to a country currently torn by an intense war for raw materials.

BookSavvy had the privilege of working with Vandana through French publisher Actes Sud.