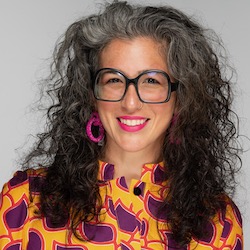 Vanessa Garcia is a Cuban American multidisciplinary screenwriter, playwright, novelist, and journalist/essayist — who has written and worked for Sesame Street, Caillou, We Are Family, and Dora the Explorer. She’s the author of the novel, White Light, which won an International Latino Book Award and was one of NPRs best books of 2015. Her first picture book for children, What the Bread Says, launched in October 2022. Theatrically, her work has been produced around the world. She’s the author of The Amparo Experience, an immersive hit that People en Español called “Miami’s Hottest Ticket.” Other plays include Sweet Goats & Blueberry Señoritas, which she co-wrote with presidential poet laureate, Richard Blanco. Her essays and thought pieces have appeared in Los Angeles Times, The Guardian, Washington Post, National Review, ESPN, The Hill, Catapult, and numerous other publications. Vanessa also hosts a podcast about family with her sister and mother called Never the Empty Nest. She holds a PhD from the University of California Irvine in Creative Nonfiction. Her dissertation focused on Cuba.